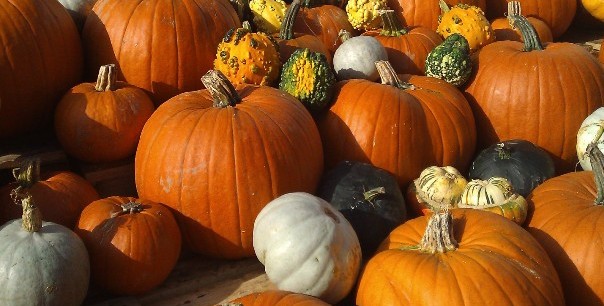 In the next few days, people throughout Pant will be displaying their carved pumpkins.

Unfortunately, due to COVID-19 many people will be staying home and will therefore have less chance to see the art created from these vegetables.

That’s why we are encouraging readers to upload a photo of their pumpkin to our website for all to see!

Whether displayed on your doorstep, in a porch or near the side of the road, we know some people go to great lengths to design and carve a scary pumpkin face.

If you get the chance to take a photo of your pumpkin at night we think this could add to the scary atmosphere.

Many of the pumpkins might even have come locally from Llynclys Farm, a big supplier of pumpkins. We are sure they’d love to see what you have made from their produce.

We are going to keep the gallery of Perfect Pant Pumpkin Photos online for a week or two so everyone has the opportunity to viewing the creations submitted.

As a family-friendly website, we reserve the right not to publish any photos that are too scary!

To upload your photo and to see others already uploaded, click here.

This recipe for pumpkin and butter bean curry is an ideal way for you to use up any pumpkin left over after Halloween. Pumpkin curry is a great winter warmer, especially if outside on Bonfire Night!

Most, if not all, of the ingredients are available at the Co-operative store in Pant or at Llynclys Farm shop, although if there are no pumpkins around, you might need to substitute butternut squash or marrow.  The advantage of making your own pumpkin curry is that you can decide how much chilli to use and therefore how hot it will be.

Per portion this is a very economical meal to make –  don’t forget to use a windfall apple, if you can get one – and served with some mango chutney and perhaps some poppadoms, it spices up any lunch or dinnertime.

Fry the onion in a little butter or oil until soft. Then add the pepper, garlic and mushrooms and fry for a couple of minutes without burning.

Turn down the heat slightly, add the curry powder and fry for two more minutes.

Then add the coconut milk, stock cubes and chilli flakes and bring to a gentle simmer. Add water as required to maintain a thick but not dry consistency.

Add the pumpkin and apple pieces and simmer for 30-40 minutes until soft. Check the consistency of the curry regularly and add more water if required. Just before serving, add the butter beans to warm through and season to taste.

Squeeze the lemon or lime juice into the pumpkin curry and serve with plain boiled rice, sprinkled with coriander leaves, or naan bread.

The staff at the Co-operative store in Pant have raised £260 for charity at their recent Halloween Costume Party.

The staff organised the event last week at Pant Memorial Hall to support Hope House Children’s Hospices, the Co-operative’s charity of the year.

Money was raised for the charity by selling cakes and holding a raffle as well as from the entrance fee. 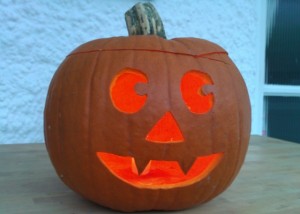 We’re looking forward to lots of spooky goings on in and around Pant in the next few days, but have you ever wondered how Halloween came about and why we celebrate all things ghostly and ghoulish on 31 October?

Sometimes it might seem that Halloween is just the latest American import, given how popular the festival is in the United States. But Halloween started in Europe long ago and developed as Christianity spread around the world.

In pagan times, the Celtic festival of Samhain was held on or around 1 November. Samhain marked the end of the harvest and the beginning of the dark winter months and was a time when spirits were said to be most active and when the souls of the dead revisited their homes. People made offerings to keep the spirits on side and welcomed the dead by setting places at dinner for departed relatives.

Today’s Halloween customs are mainly Christian in origin. Halloween is the evening before All Hallows’ Day (also called All Saints’ Day) and was traditionally known as All Hallows’ Eve. All Hallows’ Day was originally held in the month of May, but in the 9th Century the Pope switched it to 1 November to coincide with Samhain, possibly because of Celtic influence. The word Halloween dates from around the middle of the 18th Century.

By the end of the 12th Century, bells were being rung for the souls of the dead and ‘soul’ cakes were being made and shared for all Christian souls on All Hallows’ Eve. Groups of children would go from door to door collecting soul cakes in return for offering prayers to the dead – said to be the origin of trick or treating.

It was traditionally thought that the souls of the dead wandered the earth until All Saints’ Day, and All Hallows’ Eve provided the last chance for them to take revenge on their enemies before they moved on to the next world. So, people would dress up to hide their identities – as we do today at Halloween.

Many Christians in Europe also believed that once a year on All Hallows’ Eve the dead rose from their graves for a wild carnival known as the danse macabre. This was re-enacted by children from the 16th Century onwards and is seen as the reason why we have costume parties at Halloween.

The carved Halloween lantern is supposed to frighten away evil spirits and was traditionally made out of a turnip. The pumpkin was introduced from North America much more recently and has only been associated specifically with Halloween from the mid 19th Century.

Of course, many of the modern images we associate with Halloween are much more recent and are influenced by Gothic literature and horror films – this includes vampires, mummies, Dracula and Frankenstein.

So this year, when you’re out celebrating Halloween and helping to ward off those evil spirits, remember that you’re playing a part in a tradition going back thousands of years…