Towpath Improvements on the Montgomery Canal from Burgedin to Arddleen.

As part of the delivery phase of the Montgomery canal HLF-funded restoration project, the Community Rehabilitation Company (CRC) will carry out some towpath improvement work between Burgedin locks and Arddleen (low bridge).

Work will start in March 2017 and will carry on at a rate of two days a week at the beginning, reaching three days a week until completion. The group will intervene from 10.30am until 3pm, times which will also apply on Sunday. Although CRC will leave the path as safe as they possibly can, please be aware that there might be some temporary uneven towpath surface in places.

Further stretch of Montgomery Canal near Pant to be restored

Plans to restore a stretch of the Montgomery Canal near Pant have received a major boost with the announcement that £4.2m of work on a further section is to get underway thanks to a £2.53m grant from the Heritage Lottery Fund (HLF).

The bid, led by the Canal & River Trust – the charity that cares for 2,000 miles of waterways in England and Wales – and supported by the Montgomery Canal Partnership, is a major step forward in the 47-year restoration of the historic canal. About 50% of the canal has already been restored.

With the help of volunteers, work is due to start in 2017 and should be completed in 2020. It will see a further 1¼ miles of the canal and a ‘winding hole’ (turning point for narrowboats) reopen to Crickheath, Shropshire. It will also improve access to the canal, create new nature reserves (needed in view of Site of Special Scientific Interest aspects) and improve almost 4 miles of towpath between Welshpool and Llanymynech on the English border.

The project is also supported with funding from Powys County Council, Shropshire Union Canal Society, Inland Waterways Association, and the Friends of the Montgomery Canal.

Richard Parry, chief executive of the Canal & River Trust, said: “This is fantastic news. We are delighted to be awarded a Heritage Lottery Fund grant. The money together with funding from other organisations will help carry out vital work towards the restoration of the Montgomery Canal which is one of the most beautiful waterways in Britain. I would also like to thank the volunteers for their continuing hard work which has kept the dream alive to restore the canal.”

The Trust will be working with the 15 partner organisations which make up the Montgomery Canal Partnership. The Partnership aims to restore the canal fully within the next decade as a haven for people and nature. This work will bring canal boats back to Crickheath for the first time in over 80 years.

John Dodwell, chair of the Montgomery Canal Partnership, comments: “This is a major step forward in the restoration of one of Britain’s longest running canal restorations and fits into our recently announced 10 year restoration strategy for the canal. The vision of a restored waterway has been kept alive for almost half a century by an army of volunteers. The funding from the Heritage Lottery Fund will allow us to further tell the story of the canal and get more people from the local community involved in once again bringing it back to life.”

Vanessa Harbar, Head of HLF West Midlands, said: “Thanks to National Lottery players, this project has a £2.53m grant confirmed and can now go ahead. The restoration of the Montgomery Canal will see a real boost to Shropshire’s biodiversity, its nature reserves and waterways, and the strong community partnerships that have made this scheme possible.”

On Friday 21st October, the North Wales & Borders partnership for the Canal & River Trust will be hosting a showcase event at Chester Racecourse to promote the region’s waterways to the general public.

The event is a celebration of waterways in Cheshire, North Wales, Mid Wales, Shropshire & Staffordshire and will include over 40 exhibition stands from partners promoting some of the exciting initiatives taking place on and around the waterways.

In addition, there will be a programme of talks throughout the day, ranging from the various activities people can take part in on the waterways to the history and heritage of the canal network.

The event will be open from 9.30am to 3.30pm and visitors are welcome at any point during the day. There will be free parking at Chester Racecourse for those attending the event. To find out more and to confirm your place, please email Showcase16@canalrivertrust.org.uk. 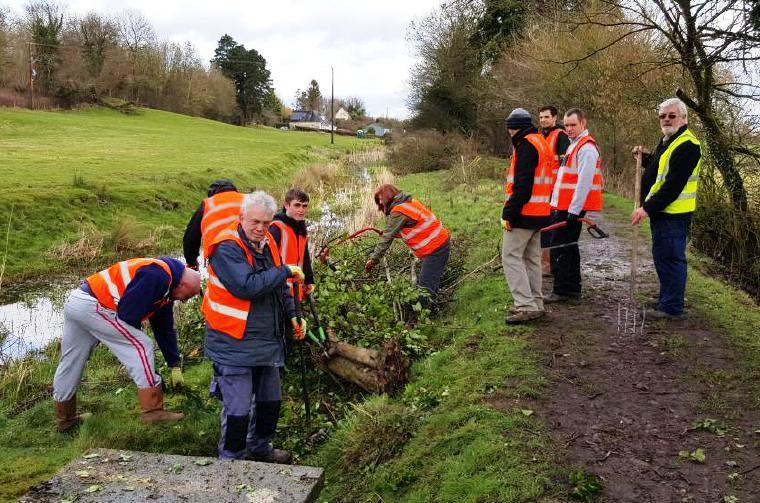 Have you seen the improvement works to the canal towpath between Bridge 88 (Station Road) and Penygarreg Lane in Pant?

If you have walked past this section of the canal bank recently you are likely to have seen people in high viz jackets clearing trees. This recent work to clear this section of the canal path is part of a long term plan to restore the Montgomery Canal and has been boosted by the use of a ‘Community Payback’ scheme to help with improving towpath surfaces and hedgerows on a half mile stretch between Pant Bridge and Penygarreg Lane.

The Canal & River Trust has been working with Warwickshire and West Mercia Community Rehabilitation Company (CRC) to carry out environmental improvement work along an important section of the dry canal.

Said Sylvia Edwards, Montgomery Canal Community Development Officer for the Canal & River Trust: “This is a trial project, which forms part of the Heritage Lottery Fund-backed development phase of the canal restoration. Ten supervised sessions will allow the Trust to gauge the effectiveness of this new approach and may form part of the ongoing restoration project for years to come.”

The Montgomery Canal runs for about 33 miles from Welsh Frankton (where it links to the Llangollen Canal) to Newtown. Much of the canal is now restored and has water in it, but for a few miles around Pant works are still required to bring it back into use. The Montgomery Canal never did reach Mongomery itself.

You can find out more about the restoration of the Montgomery Canal here and volunteers are always welcome to get involved: http://www.shropshireunion.org.uk/montgomery-canal-restoration

The Canal & River Trust is a charity entrusted with the care of 2,000 miles of waterways in England and Wales. Find out more: www.canalrivertrust.org.uk

The Canal & River Trust, the charity that is entrusted to care for 2,000 miles of waterways in England and Wales, has announced that improvements works to the canal towpath in Pant are to begin in the next few weeks.

As part of the development phase of the Montgomery canal restoration project, Canal & River Trust have asked the Community Rehabilitation Company (CRC) to work on towpath improvement works between Pant Bridge (number 88) and Penygarreg Lane. This CRC group will work on vegetation and hedge management, as well as towpath re-instalment over the next few months.

This collaborative approach has proved successful on other CRT restoration projects and it is hoped that the work on this section of the Montgomery canal will be a first step towards its involvement in the wider Heritage Lottery Funded restoration project.

Speaking about the works Sylvia Edwards, Community Development Officer at the Canal & River Trust said there would be opportunities for local residents to get involved and help support the project. She said: “As part of the Montgomery canal restoration project, the Canal & River Trust is planning a range of activities that will involve local communities. Over this spring/summer period, I would like to trial a canal heritage walk from Llanymynech to the Vyrnwy aqueduct as well as a wildlife discovery walk that takes in a navigable section of the canal.

“I would be very interested to hear from local people who have a good knowledge of the canal heritage or canal wildlife and who would be happy to volunteer a couple of hours as walk leaders.”

If you think that you have the necessary skills and knowledge, please get in touch with Sylvia by email in the first instance on sylvia.edwards@canalrivertrust.org.uk.