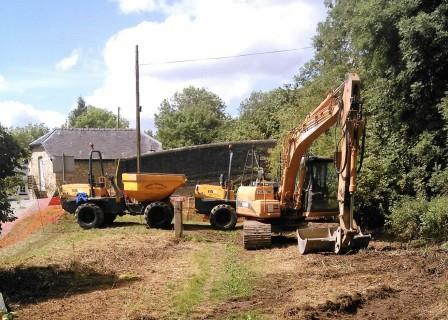 On 12 July 2017, the Shropshire Union Canal Society and the North West Waterway Recovery Group, with the support of the Canal and River Trust, took on the project to remove a former railway embankment crossing the Montgomery Canal in Pant.

The works were part of the project to reopen the dry section of the canal, between the restored section at Maesbury and the Welsh border at Llanymynech, for which an appeal to raise funds was launched recently.

Planning permission was granted on 20 March, with the proviso that the works should be overseen by a suitably qualified and experienced ecologist, to ensure the protection of, and enhancements for, wildlife.

The works were scheduled to take place over a seven day period, and two excavators, three dumpers and a fuel bowser arrived on site, along with members of the North West Waterway Recovery Group and the Shropshire Union Canal Society.

Dumper trucks transported the waste to Bridge 90 on the Canal, where a compound was set up so the other excavator could load the awaiting lorries, with banksmen on hand to escort off and onto site. 308 tonnes were removed on the first full day.

The project was completed one day early, with 1114.5 tonnes of waste removed and over 352 volunteer hours recorded.

A big thank you goes to all the volunteers involved and to the Canal and River Trust for their assistance.

For more details about the restoration project and to donate, please visit www.RestoreTheMontgomeryCanal.uk.